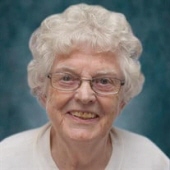 Norma Janet Baird was born February 26, 1927, on a small farmstead near Blackduck, MN, the oldest child of Floyd and Caroline (Belden) Baird. In 1945, Norma graduated from Blackduck High School, she then attended Northern Business College in Bemidji, MN, graduating with a degree in Bookkeeping and Accounting. In Bemidji, Norma worked for a savings and loan company. She enjoyed baking delicious caramel rolls and doughnuts for family and elite hotels on Lake Bemidji.

Norma married Stuart David Sanders, Jr. in Bemidji on December 28, 1947. In the fall of 1967, with a family of four children, Norma and Stuart moved to Moorhead, MN. Along with new job opportunities, the family began worship services with Pastor John Schroeder and his wife, Pat. Together the families, 50 years ago, opened the doors of what is now Brookdale Baptist Church in south Moorhead. Stuart had worked for Old Dutch Foods and passed away in 1997. Norma's deep faith in the Lord kept her going as she busied herself with friends, family and church.

After their move to Moorhead, Norma initially worked as a bookkeeper and then was hired to work in the Clay County Recorder's Office, Moorhead, until she retired. Her passions were quilting, of which she made a multitude, knitting mittens for family, card making and, at the age of 90, still baked those delicious caramel rolls. She was a no frills, hardworking servant of God to her ability.

Norma is preceded in death by her parents; an infant sister; a brother, John Baird; and her youngest daughter last year, Janet Kelly.

A sincere appreciation and thank-you to the staff of Essentia Hospital, Fargo and to staff at Bethany on University who provided compassion and wonderful care to Norma these past three weeks.

Norma's funeral service will be Saturday, March 17, 2018, at 11 AM, in Brookdale Baptist Church, Moorhead. Visitation will be one hour prior to the service.

To order memorial trees or send flowers to the family in memory of Norma J. Sanders, please visit our flower store.