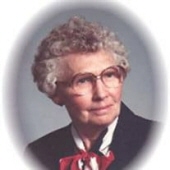 Noretta K. Roche, 94, Fargo, ND, died Monday, May 17, 2004, in Innovis Health, Fargo.
Noretta Katherine Block was born February 6, 1910, near Nicollet, MN, to Louis and Margaret (Latour) Block. Noretta was raised on the family farm near Cleveland, MN, where she graduated from high school.
Noretta was married to Ernest Levi Roche, November 18, 1931, in Milwaukee, WI, and they lived and farmed near Ottawa, MN. They moved to Vancouver, WA, during WW II, where they worked in the shipyards. They moved to Mankato, MN, in 1946, where she worked for Mankato State College as a cashier.
Ernest died December 16, 1986. Noretta moved to Moorhead, MN, in 1992, and then to Fargo in 1998 to live with her son.
Noretta is survived by her son, Ron (Patty), Fargo; two grandsons, Shaun and Ben, both Fargo; and her best friend, Gretchen the dog.
Visitation: Friday, May 21, 2004; 4 - 7 PM; Mankato Mortuary
Funeral: Saturday, May 22, 2004; 10:30 AM; Mankato Mortuary
Inurnment: Ottawa Cemetery
Memorial Service: Monday, May 24, 2004; 7 PM
Korsmo Funeral Chapel, Moorhead

To order memorial trees or send flowers to the family in memory of Noretta K. Roche, please visit our flower store.