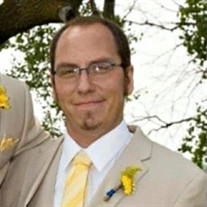 Nicholas J. Schoeberl, 37, of Fargo, ND, passed away on July 10, 2021, in Sanford Medical Center, Fargo. Nicholas “Nick” Schoeberl was born on February 29, 1984, in Park Rapids, MN, to Daniel and Deborah Mack. Nick grew up in and made his home in Fargo. He worked at Subway and Jimmy Johns, where he enjoyed visiting with people and helping customers. Nick had numerous hobbies, including hiking, and playing pool with friends. He learned to play rummy from his grandpa, often winning against him. Nick was a big sports fan, he followed the NDSU Bison and the Packers, despite most of his family being Vikings fans. He enjoyed watching Star Wars and playing with Legos as a kid. As an adult he often gave his nephews Lego sets, passing on his love for them. Nick had a great sense of humor and a memorable laugh. He was a very kindhearted and loving man. He put a ton of thought into all his gifts, not necessarily spending a lot of money, but he ensured they were meaningful. Nick treasured his friends and family and did his best to show how much they meant to him. Nick is survived by his mother, Deborah Mack; sisters, Sarah (Jon) White, and Stacey (Shane Kiland) Schoeberl; nieces and nephews, Alexis Schoeberl, John Erickson, Easton Kiland, Emma Russell, Danny White; great-niece, Natalia Skrlac; cats, Malcolm and Abbie; and many other friends and family. Nick was preceded in death by his father, Daniel Mack; and maternal grandparents, Donald and Mildred Stout. Nick’s Funeral Service will be held on Thursday, July 15, 2021, at 10:00 AM in Fargo Baptist Church, Fargo. A visitation will take place one hour prior to the service. Burial will be in Riverside Cemetery, Moorhead, MN. Arrangements by Korsmo Funeral and Cremation Service, Moorhead, MN.

The family of Nick Schoeberl created this Life Tributes page to make it easy to share your memories.

Send flowers to the Schoeberl family.