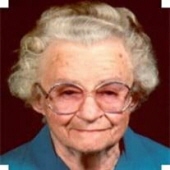 Nellie E. Miller, age 93, of Fargo, ND, died on Friday, May 28, 2004, at Villa Maria in Fargo.
Nellie Ernestine Offerdahl, the daughter of Edward and Theresa (Smith) Offerdahl, was born in Borup, MN, on August 10, 1910. She grew up and received her education in Borup, where she graduated from high school. Nellie then attended Normal School, and taught in rural schools near Borup.
On August 14, 1936, Nellie was united in marriage to Clarence Miller, in Lockhart, MN. They lived in Lockhart, Beltrami, and Ada, MN, before they made their home in Moorhead, MN, in 1941. Nellie worked for Fairmont Creamery, Moorhead, the Moorhead City Assessor's Office, and as a receptionist/switchboard operator at the Moorhead American Crystal Sugar plant, during the fall harvest campaigns.
Her husband, Clarence, died on April 15, 1991. After his death, Nellie continued to make her home in Moorhead. In February of 2000, Nellie became a resident of Villa Maria in Fargo, ND.
Nellie is survived by two children, LaVon Kuvaas, Fargo, and Wayne (Patty) Miller, Grand Forks, ND; a sister, Tracy Lower, Moorhead; six grandchildren, Janelle Richards, Joel Maddux, Wayne Miller, Cheri Willette, Kristi Reynolds, and Ryan Berg; and 14 great-grandchildren.
In addition to her husband, Nellie was preceded in death by her parents, a great-grandchild, five sisters, and two brothers.
Visitation: one hour before the funeral, at the church.

To order memorial trees or send flowers to the family in memory of Nellie E. Miller, please visit our flower store.