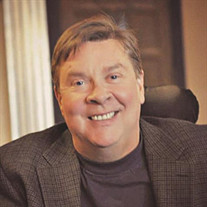 Nathan “Nate” Aalgaard, 60, of Moorhead, MN, died on March 31, 2020, after over five months of hospitalization in the ICU at Sanford Broadway Medical Center, Fargo, ND. Nathan Daniel Aalgaard was born on July 17, 1959, to George A. and Jane E. (Siberg) Aalgaard in Ada, MN, He grew up on the family farm and attended school in Halstad, MN, graduating in 1977. A few weeks after graduation, Nate was severely injured in a car accident that nearly claimed his life. After months of hospitalization and rehab care, he wheeled himself into a world that wasn’t equipped to deal with people with disabilities. Nate spent the rest of his life working to remedy that situation. Nate received his bachelor’s degree from UND in 1983. In 1994, he married Paula Ous in Grand Forks, ND. In 1996 Nate obtained his master’s degree in Rehabilitation Counseling and was hired as the Executive Director of Freedom Resource Center for Independent Living in Fargo where he worked until his death. Among his numerous achievements, Nate won the Executive Director of the Year award in 2019 and served on the Human Rights Commission from 2012-2019. One of his proudest moments was when he was invited to the White House in 1990 for the signing of the Americans with Disabilities Act (ADA). Nate was a gentle, deliberate, methodical, smart, and compassionate man. He brought those qualities into his leadership roles and was loved by many. He was a role model for all, treating everyone he met with dignity. He worked fearlessly to make the world more accessible and to educate everyone about the value of people, regardless of their abilities. In his own words from his health care directive: “Having lived with a disability since 1977 and knowing the prejudice that has existed throughout history regarding people with disabilities, I want to make it clear that I do not consider the presence of a disability a condition under which a person should be afforded any less treatment than anyone else. I want those making decisions for me to know that I do not consider my disability a tragedy, nor do I consider my life one bit less full and meaningful than if I had never had that experience.” In his personal life, Nate enjoyed shooting pool, hosting family events, painting with acrylics and watercolors, following his favorite sports teams, listening to music, spending time with his friends, sipping good wine, sitting on his patio, going bow-hunting, and having good conversations. Nate liked games, both watching them and playing them. In his younger days, he was on a traveling Wheelchair Rugby team, and more recently, he played recreational sports as part of the HOPE Inc. team. He almost always won at trivia. Nate is survived by his parents, George and Jane Aalgaard; his five siblings, Phil (Sandra) Aalgaard, Halstad, MN, Nancy (K.C.) Hanson, Moorhead, Mary Aalgaard, Baxter, MN, James (Dawn) Aalgaard, Wenatchee, WA, and Joy Ciaffoni, Moorhead. He is also survived by several nieces, nephews, godchildren, and many friends. The family would like to publicly acknowledge and thank Nate’s care team in the ICU at Sanford. They provided world-class, compassionate care for Nate. In lieu of flowers, please consider memorials to Freedom Resource Center for Independent Living, Fargo, or HOPE Inc., Moorhead. A Celebration of Nathan’s Life will be 10:30, AM, Saturday, July 17, 2021, in The Lutheran Church of Christ the King, Moorhead. (Korsmo Funeral and Cremation Service, Moorhead, MN)

The family of Nathan Aalgaard created this Life Tributes page to make it easy to share your memories.

Send flowers to the Aalgaard family.