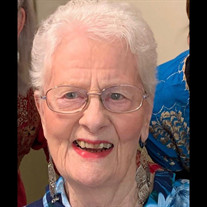 Nadine Carlson, 96, Moorhead, MN, died Wednesday, April 28, 2021, in her daughter&#8217;s home in Moorhead, surrounded by her family and under the care of Hospice of the Red River Valley. Nadine Stenshoel was born on January 24, 1925 in Crookston,... View Obituary & Service Information

The family of Nadine Carlson created this Life Tributes page to make it easy to share your memories.

Send flowers to the Carlson family.