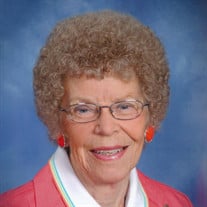 To view the recorded service for Myrtle, please follow this link: https://portal.midweststreams.com/services/iframe/19705 Myrtle D. Swanson, 94, Moorhead, MN, died Tuesday, May 4, 2021, in Lilac Homes, Dilworth, MN. Myrtle Deloris Wenner the daughter of Albin and Olga (Hitterdal) Wenner, was born in Hitterdal, MN, on September 16, 1926. She grew up and received her education in Hitterdal, where she graduated from high school in 1944. As a young lady, she lived and worked in Grand Forks, ND, and in Milwaukee, WI. She moved to Moorhead, and worked at the Fairmont Creamery, and at The Little Giant. On January 3, 1948, Myrtle married Robert C. Swanson, in Ulen, MN. They made their home in Moorhead. Myrtle worked occasionally for the US Census Bureau and doing childcare. She was active in her church, Our Savior’s Lutheran Church. She enjoyed bowling. Myrtle was very active in the VFW Auxiliary and together with Bob, was a frequent and faithful volunteer in the Fargo VA Hospital. Her husband, Bob, died September 24, 2010. Myrtle continued to live in her home in Moorhead; resided for six years at Eventide the Fairmont, Moorhead; and in October of 2020, became a resident of Lilac Homes. In addition to her husband, Myrtle was preceded in death by her parents; two sisters, Adeline Wolfe and Irene Langseth; and five brothers, Arthur, Leonard, Lloyd, Oris and Wilfred Wenner. She is survived by her five sons, Rocky (Bonnie) Swanson, Moorhead, Mike (Victoria) Swanson, Fargo; Terry (Becky) Swanson, Cottonwood, AZ, Randy (Lisa) Swanson, Zimmerman, MN, and Chad Swanson, Burnsville, MN; nine grandchildren; 11 great-grandchildren; and two great-great- grandchildren. Visitation for Myrtle will be Sunday, May 9, 2021, from 4 PM until 7 PM, in Korsmo Funeral Chapel, Moorhead. Her funeral will be Monday, May 10th, at 11 AM, also in Korsmo Funeral Chapel. She will be buried in Moorhead Memorial Gardens. (Korsmo Funeral and Cremation Service, Moorhead, MN)

The family of Myrtle Swanson created this Life Tributes page to make it easy to share your memories.

To view the recorded service for Myrtle, please follow this link:
https://portal.midweststreams.com/services/iframe/19705

Send flowers to the Swanson family.