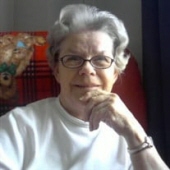 Myrtle Donna Mae Eide was born December 24, 1935, to Melvin and Bessie Eide, at home in Crystal, ND. While growing up, she was a caregiver for many of the families in the area and also looked after her younger siblings while her parents worked. In the 1950s she worked as a nanny in Oklahoma and around 1960, she began working for Borden Foods Potato Flake processing facility in Park River and Grafton, ND.

On February 10, 1966, Donna married Robert Thielbar Sr. in Cavalier, ND. They moved to Moorhead in 1976, and Donna stayed home to raise her eight children. In the late 1980s she began working as a cook at Sunset Lanes in Moorhead. She moved to Grafton in 1994, to be close to her siblings and in 2008, she moved into Halstad Living Center, where she could be cared for after the diagnosis of Alzheimer's disease.

Donna enjoyed sewing, crafting with plastic canvas, listening to polka and country music, playing board games, bingo, slot machines, and baking her famous homemade buns and rolls. Most of all she loved spending time with her children and grandchildren.

She was preceded in death by her parents, Melvin and Bessie; her brother, Donald; and her grandson, Sam.

A Private Family Service will be held for Donna.

To order memorial trees or send flowers to the family in memory of Myrtle "Donna" Thielbar, please visit our flower store.