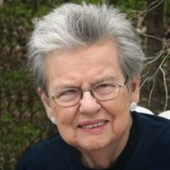 Milly was born May 5, 1929, and grew up the cherished only child of Gladys (Stach) and Norton Edlund, in Wolverton, MN. After graduating from Wolverton High School, she attended Fargo Business College, and worked at Royal Jewelers in Fargo, ND.

Milly was busy raising her family, serving as church organist, and participating in countless service organizations. She worked at Eventide in Moorhead, MN, from 1978 until 1991, and continued volunteering there after her retirement.

After Wally passed away in 2005, Milly continued to live in their home in Moorhead. She was an active volunteer with the Moorhead Legion Auxiliary and Fargo Veteran's Hospital. In 2008, she married George "Alden" Bevre. They continued to reside in Moorhead until August, 2017, when she moved to Marion Circle Assisted Living in Centennial. Milly will be deeply missed.

Her funeral will be Tuesday, November 21, 2017, at 11 AM, in The Lutheran Church of Christ the King, Moorhead.

To order memorial trees or send flowers to the family in memory of Mildred "Milly” Morken Bevre, please visit our flower store.