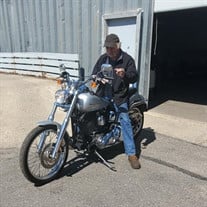 Michael D. Riebe, 63, of Fargo, ND, passed away on Sunday, November 7, 2021, in Sanford Medical Center, Fargo. Michael Dean Riebe was born on March 2, 1958, to Dale and Arvilla (Hanson) Riebe, in Williston, ND. Mike grew up in Moorhead and attended Moorhead Senior High School. Right after high school he joined the Navy. He quickly discovered he enjoyed working with his hands and held various positions as a sandblaster and a welder. Most recently he worked as a forklift operator at Structural Material Inc. In 2004 Mike started dating Betty Fear, who was a childhood friend before they started dating. The two were together for 16 years. He adored Betty’s 3 children, Scotty, Jonathan and Wendi, and often told her they were the children he never had. He boasted about them, and their accomplished, with pride in his eyes and to his last day, carried photos of them in his wallet. Mike was there from day one for the birth of every one of their children and was simply “Grandpa Mike” to all. Mike thoroughly enjoyed spending time with his family and friends. Mike also enjoyed working with his hands outside of his job. One of his hobbies was woodworking. He made rocking chairs for his nephews, and necklace holders among many other things he created over the years. He really had a talent and the creativity for making anything. Mike loved riding his Harley Davidson motorcycle. He also had a collection of cookbooks, but not because he was a cook. Mike would select recipes, and Betty would often cook them for him. He loved Betty’s cooking. Mike was preceded in death by his father, Dale; sister, Susan Cossette; and brother, Jeff Riebe. Mike is survived by his girlfriend of 16 years, Betty Fear; mother, Arvilla; sister, Pamella (Steve) Quiggle; Betty’s children, Scotty (Katie) Fear, Jonathan Fear, and Wendi Majerus; grandchildren, Jordyn Fear, Beau Majerus, Colton Majerus, Bella Fear, and Remy Fear; and many nieces, nephews and great-nieces and great-nephews. Mike’s memorial service will be held on Thursday, November 11, 2021, at 2 PM with a visitation one hour prior, in Korsmo Funeral Chapel, Moorhead, MN.

The family of Michael D. Riebe created this Life Tributes page to make it easy to share your memories.

Send flowers to the Riebe family.