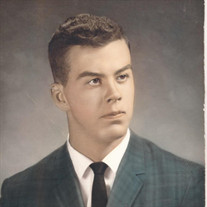 Michael H. “Mike” Bellmore, 72, of Fergus Falls, MN, and formerly of Devils Lake, ND, died Friday, January 29, 2021, in LB Broen Home in Fergus Falls. Michael Howard Bellmore was born December 13, 1948, in Minneapolis, MN, the son of Howard and Irene (Ehlert) Bellmore. He was raised in Breckenridge, MN, where he graduated from high school in 1966. After high school, Mike attended the Wahpeton (ND) State School of Science for two years before finishing his degree in journalism at Moorhead State University in Moorhead, MN. Mike then moved to Devils Lake where he went to work at the Devils Lake Journal as a Sports Writer and later became the Sports Editor. For forty years Mike followed local sports and was able to write many articles on some great teams and athletes. He was also the recipient of many awards for his writing. After he retired in 2010, Mike moved to Fergus Falls where he continued to write feature stories for the Fergus Falls Journal. For the last three years, he has made his home at the LB Broen Home in Fergus Falls. Mike was a dedicated employee and rarely missed a day of work over they years. He loved writing and had a knack for putting his thoughts and words to paper as a writer. Mike also had a big heart, a great sense of humor and a great love for his family. He was avid sport fans, especially local and high school sports, and had a great love for trains. He is survived by his father, Howard, Bellmore, Fargo, ND; siblings, Mark (Liz) Bellmore, Portage, WI, Cathy Bellmore, Fargo, Steve (Jean) Bellmore, McHenry, IL, and David (Shawne) Bellmore, Duluth, MN; sister-in-law, Patty Bellmore, St. Louis, MO; and many nieces, nephews, and great nieces and nephews. He was preceded in death by his mother, Irene; and twin brothers, Bruce and Brian. A Memorial Service for Mike will be held in late spring/early summer. Burial will take place in St. Thomas Catholic Cemetery, Kent, MN. (Korsmo Funeral and Cremation Service, Moorhead, MN)

The family of Michael "Mike" Bellmore created this Life Tributes page to make it easy to share your memories.

Send flowers to the Bellmore family.