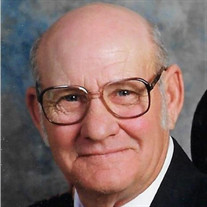 Melvin Arthur John Richards was born on January 6, 1928, at home in rural Kragnes, MN, the youngest of eight children, to William J. and Bessie T. (Vigness) Richards. Mel grew up on the family farm and attended the “Richards” schoolhouse near his grandparents’ home in rural Kragnes. He was drafted into the US Army in January of 1954, served in the field artillery in Korea, and was honorably discharged in October of 1955. On August 23, 1958, Melvin married Patricia E. Tweeten in Moorhead, MN, and they moved to the home farm north of Moorhead. He farmed with his brother, Tom, and worked part-time for American Crystal Sugar at the Moorhead plant. He also raised dairy cattle, milked cows and raised small grains. Mel and Pat enjoyed serving their church in many different capacities. Three days before his death, Mel moved from the farm to long-term care at Rosewood on Broadway, in Fargo, ND. He died on Friday, April 16, 2021, at age ninety-three, under the care of his family and Hospice of the Red River Valley. Mel is survived by his two sons, John Richards, Hawley, MN, and Jeff (Flo) Richards, rural Moorhead; five grandchildren, Ben (Allison) Richards, Sara (Josh) Koppelman, Katie (Shawn) Scott, Angie Richards and Michael Richards; ten great-grandchildren; and six nieces and nephews. Mel was preceded in death by his parents; his wife; two brothers, Roy and Tom; five sisters, Ellen, Margaret, Mabel, Carol and Betty; and his daughter-in-law, Dawn. Memorials are preferred to Hospice of the Red River Valley. Visitation for Mel will begin at 12 PM, followed by a funeral at 1 PM, Thursday, April 22, 2021, in Salem (West) Evangelical Free Church, Fargo. The church is recommending masks. Burial, with full military honors, will be in Riverside Cemetery, Moorhead. Following the burial, friends are invited to join the family for a time of fellowship at the farm. 12447 – 5th Street North, Moorhead.

Melvin Arthur John Richards was born on January 6, 1928, at home in rural Kragnes, MN, the youngest of eight children, to William J. and Bessie T. (Vigness) Richards. Mel grew up on the family farm and attended the &#8220;Richards&#8221; schoolhouse... View Obituary & Service Information

The family of Melvin Richards created this Life Tributes page to make it easy to share your memories.

Send flowers to the Richards family.