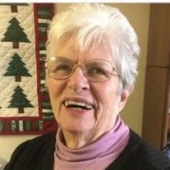 Marlys Marie (Robertson) Johnson was born to Clarence "C. L." and Marie (Urban) Robertson in Jamestown, North Dakota, on November 24, 1930. She always had pride in the sternness of that Scottish and German heritage.
After graduating Jamestown High School and college, she finished her nursing degree at the University of Minnesota. In the Cities she met and married a lean Swede with the 'million dollar smile' from the Iron Range. With four kids in tow, Marlie and Harv left town for good in 1960 and trekked back to Jamestown where numbers 5 and 6 were born. Mom worked as an RN at the local hospital for more than 20 years, raised her young, and lay both her parents to rest.
In 1993, Marlie and Harv moved permanently to Bad Medicine Lake near Itasca Park, Minnesota, where they thrived in their woodland paradise for 20 years. Many joyful family holiday feasts enlivened that cabin on the lake, and they all ended with 15 to 20 of us belting out ballads and hymns and pop music around mom's beloved piano.
Mom and dad moved into Park Rapids for a year before settling into Moorhead, Minnesota, where Harv passed away in 2014. A series of falls and illnesses took their inevitable toll, and the tough Scottish lass passed peacefully into eternity on February 4, 2017, after several strokes.
Mom was mostly about family, but she always accompanied choirs at the various churches they attended: First Presbyterian in Jamestown, Riverside Methodist in Park Rapids, and First Presbyterian in Moorhead. In assisted living care, she continued to bless residents with her sensitive touch on the piano.
Mom didn't entertain much (if at all), ran a rather loose ship with housekeeping, thought dad was an incurable hypochondriac, wasn't too sympathetic about our aches and pains - probably because of her own off-the-charts pain threshold, and she didn't particularly enjoy cooking (understatement). She did love to read and took part in ongoing book clubs for years. She cherished several lifelong friendships. She was philosophically radicalized by Nixon's presidency.
Mom left us kids with two marvelous gifts: music, and devotion to her man. Between Sister Norberta at the Catholic Academy and Jamestown College, mom received 12 years of piano lessons. She had great touch in accompanying choirs and soloists and high school musicals. She inspired us all to take up instrumental and choral music. She and daughter Nancy often put four hands of rapture together for many memorable duets. We all vividly remember mom putting the final batch of cookies into the oven, heading to the piano to relax, and two songs later calling out for one of us to remove the smoldering wreckage from the oven. We ate them all! What a blessing to drift off to sleep night after night to a benediction of Brahms, Prokofiev, Liszt and Chopin. Dad was her greatest fan.
And she was his. They both worked hard, raised six kids and helped them through college, built a beautiful lake home in stages, as income allowed, vacationed and traveled and loved through 59 years together. They walked and held hands, they battled over cribbage. Her fierce love and loyalty for Harv and her six kids were legendary. But she had a soft heart. After one spat during which words were said in frustration, I caught a glimpse of mom and dad in a warm reconciling hug in the middle of the kitchen linoleum. Our lives were very secure in that embrace. After dad's death three years ago, mom never fully recovered. She couldn't. They were one flesh, and the bond was broken. We hope they are now complete once more.
Farewell, mom. May we live and love as you taught us by your life.
Marlys was preceded in death by her parents; her sister, Jean and brother-in-law Vern Pearson; by 'dear old Harv,' and his siblings and mother. She is survived by six children, Nancy (Lowell) Einerson, Doug (Helen) Johnson, Sally (Ron) Rutten, Barb Johnson and Robert Blake, Sue (Jon) Wagner, and Phil (Lisa) Johnson. She is also lovingly remembered by 12 grandchildren and 12 great-grandkids.
Special thank-you from one fallen RN to the many professionals who provided her faithful, loving and exceptional care.
A gathering of friends will be Thursday from 5 to 7 PM at Korsmo Funeral Chapel in Moorhead. A memorial service for Marlys will be Friday, February 10, 2017, at 11 AM in First Presbyterian Church, Moorhead.

To order memorial trees or send flowers to the family in memory of Marlys Johnson, please visit our flower store.