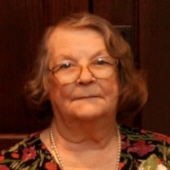 Marlene Lavonne Tostenson was born December 19, 1934, the daughter of Martin and Lucille (Scramstad) Tostenson, in Underwood, MN. She was raised on the family farm near Underwood and graduated from Underwood High School in 1952. After graduation she moved to Norman, OK, to be with her future husband, Merle Johnson. Marlene and Merle were married on January 24, 1953, in Oklahoma City, OK. They moved to Philadelphia, PA, and then to Pensacola, FL, until Merle finished his service to the Navy.

At that time they moved to Fergus Falls, MN, and later settled in Underwood while Merle attended college. They then moved to Moorhead where Merle finished his college degree. Since 1958, Marlene and Merle have made their home in Moorhead, except for the three years Merle taught in Dilworth. For many years, Marlene's parents lived with them in their home in Moorhead.

She was a member of The Lutheran Church of Christ the King in Moorhead. Marlene enjoyed taking care of her home and family, completing word puzzles and loved to care for her pets and sometimes the pets in the neighborhood.

She was preceded in death by her parents and an infant sister.

A Visitation for Marlene will be one hour prior to her funeral service.

Burial will be in Tordenskjold Lutheran Cemetery, rural Underwood, MN.

To order memorial trees or send flowers to the family in memory of Marlene Johnson, please visit our flower store.