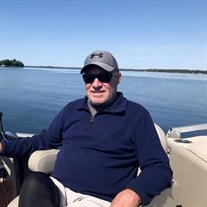 To view the Celebration of Life Service please click the following link: https://portal.midweststreams.com/services/iframe/24282 Born April 8, 1952, our beloved husband, father, father-in-law, and grandpa Mark R. Wergeland, 69, passed away at our home on Pelican Lake on Saturday, September 18, 2021, from a pulmonary embolism. Mark’s death was on the morning he and his family were to attend his Dad ‘s (Howard) burial. Mark’s Dad died on August 25, just three short weeks before Mark’s untimely death. Mark Roman Wergeland was born in Fargo, ND, to Howard Manfred Wergeland and Marcell “Marty” (Schonberger) Wergeland. He grew up in a Norwegian and Bavarian German home in Gardner, ND, Newfolden, Aitkin, Hawley, Mankato, and Moorhead, MN. Mark was extremely proud of his Norwegian heritage and lineage as well as his Bavarian German roots. He graduated from Moorhead High School in 1970 where he was a member of the 1970 Cross Country District 23 champs and state-bound Track Team. In 1970, he was awarded the Hoffman Award. In 1974, Mark graduated with honors from Concordia College in Moorhead with degrees in Elementary Education, Physical Education, Health, and Coaching. He earned his master’s (M.S.) degree and Educational Specialist (Ed.S.) degree in Educational Administration from Mankato (MN) State University. On December 22, 1973, Mark married Diane (Lien) Wergeland in The Lutheran Church of the Good Shepherd in Moorhead. Mark and Diane were high school sweethearts and both only children who loved and supported each other always. They were blessed with three sons: Bryce Roman, Brett Howard, and Blake James. From 1974-1981, Mark taught and coached in St. Peter, MN, before accepting the position of principal at Central Elementary. In 1981, Mark and his family moved to East Grand Forks, MN, where he was the principal at River Heights Elementary. While his family grew, Mark supported his communities through involvement in civic organizations as well as church organizations. He served as president of Minnesota Elementary Principals Association Western Division President and represented this region on the state board. He served on the boards for youth hockey and youth basketball as well as coached youth sports. In 1992, he received the Minnesota Youth Athletic Services (MYAS) Coach of the Year award. During 1985 Mark worked for the North Central Accreditation and the U.S. Department of Defense evaluating schools on military bases in Newfoundland and throughout Europe. Another family move was made in 1987 when Mark accepted a principalship in Faribault, MN. While principal at Lincoln Elementary School, he led his team of faculty, staff, and students to receive the National Blue Ribbon School status for 2008, which was awarded by the U.S. Department of Education. In 2014, he retired after working as Principal, Human Resources Director, and Interim Superintendent in Faribault. In 2000, Mark and his family relocated to the edge of The Big Woods in Northfield, MN. During the summer of 2016, Mark and Diane retired to their lake home on Pelican Lake where Mark had called his summer home since 1966. In the few short years of retirement, Mark and Diane were able to travel throughout the United States, Norway, Europe, Singapore, and Bali and were always planning or ready for another adventure together. Mark is survived by his wife, Diane, of Pelican Lake; sons and spouses, Bryce and Teri, Deephaven, MN; Brett and Laura, St. Paul. MN; and Blake and Mari, Oslo, Norway; grandsons, Harrison, Johannes, and August. Preceding Mark in death were his dad, Howard, on August 25, 2021, and his mom, Marty, in November 2019. A Gathering of Family and Friends for Mark will be from 5 p.m. to 7 p.m. on Friday, October 1, 2021, at Korsmo Funeral Service in Moorhead, MN. The Celebration of Mark’s Life will be at 1 p.m. on Saturday, October 2, 2021, at Zion Lutheran Church on Franklin Lake, rural Pelican Rapids, MN. Interment will be at the Zion Lutheran Cemetery Columbarium immediately following the service. Mark’s Celebration of Life will be live-streamed and the link can be found on his obituary page of the Korsmo Funeral Service website. Masks will be required and provided, if needed, for those in attendance. Blessed be the memory of Mark Roman Wergeland. (Korsmo Funeral and Cremation Service, Moorhead, MN)

The family of Mark R. Wergeland created this Life Tributes page to make it easy to share your memories.

To view the Celebration of Life Service please click the following...

Send flowers to the Wergeland family.