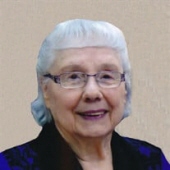 Maria Dersch was born October 3, 1928, in Mainz, Germany, to parents Katharina and Philipp. She was the youngest of 4 children. As a child, she began her ballet training, then traveled professionally with the ballet company Raimonda.

Maria met her husband Wilbur in August of 1950, and they were married on October 30th of the same year. Wilbur was an American stationed at the Air Force base near Maria's home town. Their first daughter, Heidi, was born in Germany and had her first birthday on the boat coming to America. They lived in Floodwood, MN, then Forbes, MN, and eventually Glyndon, MN.

Maria co-founded a dance studio on the Iron Range, and opened her own studio in Glyndon where she taught until a car accident forced her to quit. They moved to Moorhead, and Maria began her second career as a ward clerk on the medical floor at St Ansgar Hospital. Never losing her love for the art of ballet, Maria returned to teaching in 1982, opening Camria Ballet Academy in Moorhead.

A visitation for Maria will be Thursday from 5 PM to 7 PM, with a Prayer Service at 6 PM, in Korsmo Funeral Chapel, Moorhead.

Her Funeral Service will be Friday, January 13, 2017, at 2 PM, in Our Savior's Lutheran Church, Moorhead.

To order memorial trees or send flowers to the family in memory of Maria Crist, please visit our flower store.