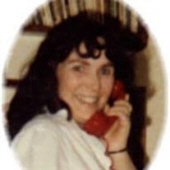 Margaret Jane Sorby was born January 13, 1931, in Fargo, ND, to Melvin and Celestia (Oas) Sorby. She grew up in Moorhead, MN, where she graduated from high school in 1948. She went on to attend Interstate Business College for one year and later worked for Northwestern Bell Telephone as an operator.

On January 20, 1950, Margaret married Vernon S. Muhle in Glyndon, MN, and they made their home in Moorhead. In 1956, they moved to Fargo, ND. Margaret and Vernon became members of St. Mary's Cathedral in 1957. Both were very active members as they attended Cursillo retreats and belonged to Catholic Family Movement groups. Margaret was also a member of the Guild of Christian Mothers and taught CCD for nine years.

Margaret enjoyed crossword puzzles, reading, and playing cards. She was a skilled artist and a self-taught piano and organ player. Her family also enjoyed her talent of cooking wonderful meals.

Margaret died on Tuesday, April 18, 2006, in MeritCare Medical Center, at the age of seventy-five.

She is lovingly survived by her husband of fifty-six years, Vernon; three sons, Butch (Joie), Dave (Sheila), and Jeffrey (Laura), all of Fargo; a daughter, Lorna Muhle, Fargo; six siblings, Dorothy, Duane, Celia, Gloria, Earl and Virginia; eleven grandchildren; and twelve great-grandchildren. She was preceded in death by a baby girl, Laurel Mary; several siblings; and a grandson, Joshua Michael.

To order memorial trees or send flowers to the family in memory of Margaret Muhle, please visit our flower store.