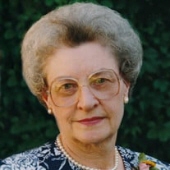 Margaret Jenny, 85, Fargo, ND, died Thursday, November 24, 2016, in Sanford Hospital, Fargo.
Margaret Jacqueline Richards, daughter of Robert and Agnes (Sebestl) Richards, was born in Elizabeth, MN, on September 26, 1931. She grew up on the family farm near Georgetown, MN. She graduated from Moorhead (MN) High School in 1949. She attended Dakota Business College in Fargo, and worked for Ford Motor Co., and Warner Insurance, both Fargo.

On July 15, 1953, Margaret was united in marriage to David Jenny at the Catholic church in Georgetown. The first lived in Norfolk, VA, while Dave was in the service. They also lived in a number of communities up and down the Red River Valley. In 1981, they made their home in Fargo, where they had lived since.

Margaret was a wonderful wife, mom, grandma and great-grandma. Her mission in life was caring for her family, and she did that so well. She listened to and was interested in all of her grandchildren's happenings.

Visitation for Mrs. Jenny will be Tuesday, 4 PM to 7 PM, with a wake service at 7, in Korsmo Funeral Chapel, Moorhead.

To order memorial trees or send flowers to the family in memory of Margaret Jenny, please visit our flower store.