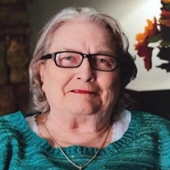 Margaret Delvina Alich was born April 22, 1936, in Border, MN, to John and Delvina (St. Lawrence) Alich. She was raised on the family farm south of Baudette, MN, where she attended school.

She was united in marriage to Kenneth Koranda on October 21, 1952, in International Falls, MN, and they made their home at Pitt, MN, where they farmed for four years. Margaret and Kenneth lived in a number of places when he was working, including Vancouver, WA, Albert Lea, MN, and then to Moorhead, MN, in 1958.

Ken died October 6, 1991, and Margaret continued to make her home in Moorhead. Margaret worked as a court bailiff for Clay County after Ken's death. She was currently making her home in River Pointe, Moorhead.

In addition to her husband, she was preceded in death by a daughter, Connie.

Visitation for Margaret will begin at 10 AM, followed by a funeral Mass at 11 AM, Wednesday, November 2, 2016, at St. Francis de Sales Catholic Church, Moorhead.

To order memorial trees or send flowers to the family in memory of Margaret D. Koranda, please visit our flower store.