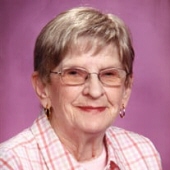 Margaret Helen (Conlon) Martin, 92, died peacefully at Bethany on University, Fargo, ND, on Sunday, January 4, 2015. Two of her daughters and a granddaughter were there to see her off on the trip she had long been anticipating. Her stepfamily was always attentive and also lovingly cared for her. Margaret's Bethany family kept her close in their hearts and surrounded her family with love as they cared for her.

Margaret was born August 12, 1922, in Waterford, MN, to Edwin and Catherine (Armstrong) Knapp. She grew up in Dickinson, ND, where she graduated from high school and attended college. As a young woman, Margaret discovered her artistic talent. She especially enjoyed sketching and oil painting, pursuits she returned to after her children were grown. She married Tom Conlon in 1943 and they raised six children. She was a homemaker, was actively involved in PEO, and in the Congregational Church and choir. She had a close circle of friends with whom she shared a lifetime of madcap moments. She loved to play cards, especially cribbage, was an avid reader and loved music. She was a walker and health conscious before it was a craze. She stayed in touch with current events and pop culture even to the end.

In 1983 Margaret married Donald Martin. They lived on Don's farm near Westhope, ND, before retiring first to Bismarck, ND, and later to Fargo. She and Don loved to travel and camp. They took trips to Alaska, Australia, New Zealand, Europe, and traveled throughout the United States. She was an excellent navigator and spent many hours studying maps. Margaret also traveled to Hawaii with a friend and to China with some of her children. Margaret took the road less traveled and created adventures whenever she could. Eventually, Margaret and Don considered Bethany their home, making many friends while the staff became their extended family.

A gathering for friends and family will be held in Korsmo Funeral Chapel, Moorhead, from 6-8 PM Wednesday, Jan. 7, 2015.

A Funeral Service will be held in Mavis Whiting Chapel, Bethany on University, Thursday, Jan. 8, 2015, at 2 PM.

To order memorial trees or send flowers to the family in memory of Margaret Conlon Martin, please visit our flower store.