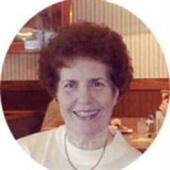 Lyall Athelyn Bailey, daughter of William and Libby (Pearson) Bailey, was born January 13, 1930, in Little Falls, MN. The family left Little Falls in 1942, moving to Perham, MN, and later to Milwaukee, WI. In 1945 they made their home in Fargo, where Lyall graduated from Oak Grove High School in 1947. She was employed by Northwestern Bell, Fargo, working as a service representative.

Lyall was united in marriage to Kenneth Elstad on August 28, 1948 in Moorhead,, where the couple made their home.

To order memorial trees or send flowers to the family in memory of Lyall A. Elstad, please visit our flower store.