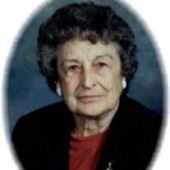 Lucinda Marie Thurmes, daughter of George and Amalia (Wilmes) Thurmes was born October 12, 1921, in St. Paul, MN. She grew up in St. Paul/Lake Elmo, MN area, where she received her education. She was united in marriage at Lake Elmo to August Heinisch on September 27, 1941. While Augie was in the service during WW II, Cindy lived in St. Paul, and for a period of time, with Augie in the State of Virginia.

After Augie's discharge from the US Navy, the family made their home in St. Paul. In 1952, the family moved to Moorhead, where they owned and operated Heinisch Scale Service for many years. Augie died on Sept. 15, 1983.

After his death, Cindy continued to live in Moorhead, where she was an active member of St. Francis de Sales Catholic Church.

In addition to her husband, Cindy was preceded in death by her parents; a son, George; two sisters, Betty Kellerman and Gertie Domeier; and three brothers, Hubert, Marvin, and Leonard Thurmes.

To order memorial trees or send flowers to the family in memory of Lucinda Heinisch, please visit our flower store.