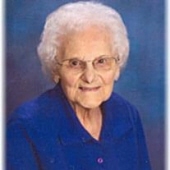 Lucille Rose Miller was born January 20, 1920, on the family farmstead, near Fingal, ND, to Frank and Hattie (Langer) Miller. She grew up in the Fingal area where she attended country school. As a young woman, Lucille worked as a housekeeper and provided child care for area farmers.

On November 12, 1941, Lucille married Roy Klinger Sr. in Fingal. They made their home in Tower City, ND, where they farmed. In 1948, they moved to McVille, ND, and then eventually settled in Thompson, ND. Lucille worked for several years at the Thompson Public School.

In July of 1991, Roy died and Lucille continued to make her home in Thompson until moving to Moorhead in 2002. Lucille was a member of the Altar Society at St. Jude's Catholic Church in Thompson. She enjoyed gardening, canning, traveling, and going to the lakes to fish.

In addition to her husband, she was preceded in death by her parents; a brother, Frank Jr.; and 2 sisters, Viola Steidl and Delores Huber.

To order memorial trees or send flowers to the family in memory of Lucille R. Klinger, please visit our flower store.