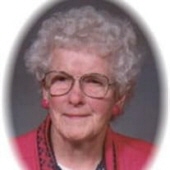 Loraine Vendella Redding was born on November 8, 1901, to Leonard and Minnie Redding of Lamberton, MN, the second of their four children. She died peacefully on Monday, May 11, 2004, at Eventide Lutheran Home in Moorhead, MN, at the age of 102.

Loraine grew up in Lamberton, MN, and graduated as class valedictorian from Lamberton High School in 1919. In 1920 she enrolled at Rockford (IL) College where she studied science and biology. She received her degree in 1924 and returned to Minnesota where she taught at the high school level in the cities of Wadena, Two Harbors, and White Bear Lake. In 1925 her family moved to Grand Rapids, MN, where her father became a restaurant proprietor. He died in 1930.

While teaching at White Bear Lake, she met fellow teacher, Harvey Monson, of Moorhead. Harvey then enrolled in the University of Minnesota School of Dentistry. They were married in Minneapolis, MN, on Sept. 12, 1934. In 1935 they moved to Moorhead where Dr. Monson began his dental practice and their three sons were born. He died in 1954.

Loraine was a stay-at-home mother and also did substitute teaching at Moorhead High School. After her husband's death, she began working at Gate City Savings in Fargo, ND. She retired in 1966. She then worked for Dr. Joel Broberg at NDSU as the secretary for the National Science Foundation's Summer Teacher Institute until the mid 1970s. Loraine liked to be "on the go" and was involved with many organizations, associations, and clubs over the years. She was active in Bethesda Lutheran Church Ladies Aid, Luther League, Circle, and worship. She achieved 84 years of membership in the Order of the Eastern Star. Loraine was a member of the Moorhead Public Library Board from 1953 to 1974. She was a charter member of PEO Chapter CO in Moorhead. She also belonged to the AAUW and Retired Teachers Association. In 1975 she was part of a group of women who organized the Moorhead Thrift Shop, where she worked faithfully each week until this past summer.

Loraine lived until 1996 at her home on 10th St. S. in Moorhead that she and Harvey had built in 1941. She then moved to Eventide Catered Living in Moorhead, where she resided until last September when she became a resident of Eventide Lutheran Home.

Most important to Loraine were her three sons and their families. She is survived by her three sons, Richard (Patricia) Monson of Brookline, MA, Robert (Gail) Monson of Fargo, and John (Helen) Monson of Long Prairie, MN; five grandchildren, Cybel Monson,
Loraine lived a long, healthy, and full life. She will always be remembered as a kind and caring Mother and Grandmother. God bless the memory of Loraine Monson!

Visitation: Thursday, 5 PM to 7 PM,
Korsmo Funeral Chapel, Moorhead, and
one hour before the funeral, at the church.

To order memorial trees or send flowers to the family in memory of Loraine Monson, please visit our flower store.