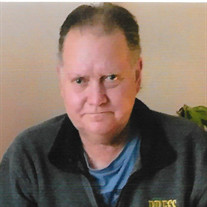 To view Lee's memorial service by livestream, please follow the link: https://portal.midweststreams.com/services/watch/6OqSPgh5w2 Llewellyn R. Hughes III, Moorhead, MN, died Friday, April 9, 2021, in his residence. Llewellyn Robert Hughes III, known to many as Lee, was born September 15, 1962, in Houston, TX, and soon adopted by Llewellyn R. Jr and Mary K (Cox) Hughes. He was raised and educated in Houston. Following high school, Lee attended a local vocational college, earning his certificate in auto mechanics. For 27 years, Lee worked on rebuilding engines, and energy transformers. While in North Dakota, he lived in Minot, Bismarck and in 2017, moved to the Fargo-Moorhead area. On July 10, 2019, Lee was united in marriage to Cheryl Majer in Moorhead. They made their home here in Moorhead. Lee and Cheryl enjoyed time together, shopping, trying different restaurants, cooking, barbeques and spending time with friends. Taking care of people was a gift Lee shared with anyone he met. Before moving from Houston, Lee took exceptional care of his parents. He had a passion for rock music, and loved listening to his favorite artist, Eddie Van Halen. When he was younger, he played drums in a rock band with his friends. He also enjoyed playing baseball while in high school and spending time at the beach. Lee will be dearly missed by his wife, Cheryl Hughes; daughter, Leah Burns; two grandchildren; and his father-in-law, Laurel (Arlette) Majer. He was preceded in death by his parents; grandparents; mother-in-law, Donna Majer; and his beloved rottweiler. Memorial Service for Lee will be held Wednesday, April 14, 2021, at 11AM in Korsmo Funeral Chapel, Moorhead. Lee’s service will be livestreamed on his obituary page at www.korsmofuneralservice.com.

The family of Llewellyn R Hughes III created this Life Tributes page to make it easy to share your memories.

To view Lee&#39;s memorial service by livestream, please follow the...

Send flowers to the Hughes family.