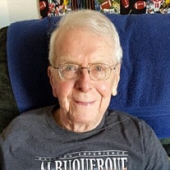 Linus Joseph Wambach was born May 7, 1928, the son of Mathias and Dorthea (Zenk) Wambach, in Moorhead, MN. He was raised in Georgetown, MN, until the death of his father, when his family moved to Moorhead where he attended school. Linus then worked at the Fairmont Creamery for three years before he entered the U.S Army serving during World War II. After his discharge, he returned to Moorhead and went to work for the Veterans Affairs as a clerk.

On February 23, 1952, Linus was united in marriage to Helen Schmitt in St. Francis de Sales Catholic Church in Moorhead. They made their home in Moorhead where he worked for the U.S. Postal Service as a letter carrier until retiring in 1981. Shortly after they moved to West Fargo in 2000, Helen passed away on October 19th. For the last four years Linus has been residing at Kind-er Care.

He was a member of Holy Cross Catholic Church and the Knights of Columbus.

Linus enjoyed dancing, swimming, and baseball especially the Minnesota Twins and F-M Red Hawks. His greatest joy was spending time with his family.

In addition to his wife, Linus was preceded in death by his parents; three brothers and five sisters.

Visitation will be one hour prior to his funeral.

Burial will be in Fort Snelling National Cemetery, Minneapolis, MN.

To order memorial trees or send flowers to the family in memory of Linus J. Wambach, please visit our flower store.