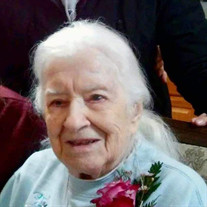 Katherine Kramer Beachy passed away peacefully on May 31, 2020, at the age of 100, in Moorhead, MN. A memorial service will be held at a later date and she will be interred in Glendive, MT beside her husband Jonas. Katherine was born on January 25, 1920, the second of seven children of Joseph D. and Clara (Miller) Kramer of Plain City, OH. Katherine met her husband Jonas Milton Beachy in the Plain City community and they were married on January 1, 1939. They had eight children, four boys, and four girls. One of their sons, Jonathan, died at birth. Jonas and Katherine’s life journey took them from Ohio to Minnesota, Montana and North Dakota, where Jonas was the pastor of Mennonite churches in several communities. Katherine became a strong leader in the Christian communities that they served and across the North Central Conference of the Mennonite Church. Family was very important to Katherine and she valued her many roles as mother, sister, grandmother, and great-grandmother. Katherine’s generous spirit filled her home, which was always warm and welcoming. She was curious and loved to read. Throughout her life she stayed engaged intellectually and enjoyed conversing about current events. Katherine lived closed to family for the last years of her life and enjoyed many visits from her children, grandchildren, and great-grandchildren. She celebrated her 100th birthday with family and friends four months prior to her passing. Katherine was preceded in death by her husband of 57 years, and her siblings, Inez, Eli, Mary Ann, Joseph, Emma, and Francis. She is lovingly remember by her children, Ron (Naomi Engevik) Beachy of Moorhead, Karen (Leighton) Ziegler of Billings, MT, Ardyce (Bill) Alberts of Portland, OR, Tim (Susan Horst) Beachy of Langley, BC, Mark (Betty Powell) Beachy of Browerville, MN, Lois Beachy of Bluffton, MN, Rose (Jim Goerg) Beachy of Eugene, OR, and her 11 grandchildren and 18 great-grandchildren.

Katherine Kramer Beachy passed away peacefully on May 31, 2020, at the age of 100, in Moorhead, MN. A memorial service will be held at a later date and she will be interred in Glendive, MT beside her husband Jonas. Katherine was born on January... View Obituary & Service Information

The family of Katherine Beachy created this Life Tributes page to make it easy to share your memories.

Send flowers to the Beachy family.