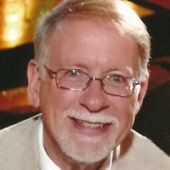 On July 24th, following a long battle with Corticobasal Degeneration, Julian "Duane" Elofson went to Heaven to be with his parents, Betty and Julian Elofson, and his older brother, Myron. A lifelong resident of Fargo-Moorhead, Duane will be remembered as the beloved longtime co-owner of the Moorhead Tastee Freez, an active member of Bethel Evangelical Free Church, an avid fisherman, and an enthusiastic world traveler who loved sharing his faith with others wherever he went.

He is survived by his daughters, Terri Elofson Bly and Rachel Elofson; his sister Sharon Hanson; his granddaughters Eliana and Meron Bly; the mother of his children, Fern Elofson; and three nephews, Jamie, Michael and David.

Born on December 29, 1949, in Fargo, ND, Duane was the third child born to Betty and Julian Elofson. A talented musician, Duane and several of his closest friends formed the band Overland Stage when Duane was 15. His unique tenor voice and commanding stage presence made him the natural choice for lead singer, and the band's success ultimately led them to a recording deal with Epic Records in San Francisco. It was at the height of their success that Duane and his bandmates became born again Christians - or "Jesus Freaks," as they were called back then - and began incorporating their faith into their songs, essentially becoming one of the first Christian rock bands in the country. Although Duane would ultimately decide to leave band life behind, his faith in Jesus and his love of music would remain core parts of his identity for the rest of his life.

In 1972, Duane married Fern Frydenlund of Moorhead, MN. In 1973, the first of their two daughters was born. Prior to the birth of his second daughter in 1975, Duane decided to leave the band and take a job that would provide a more stable life for his growing family, as manager of the Moorhead Kentucky Fried Chicken, where he would remain until 1991 when he and Fern decided to purchase the Moorhead Tastee Freez. Over the next 30 years, Duane (or "Dr. Freez') helped build a thriving business with a devoted group of employees, some of whom returned every season for over 15 years, until his retirement in 2018.

Although Duane thrived in his role at the helm of the Tastee Freez, his true passion was travel, which he did whenever he had the opportunity, taking his employees on Caribbean cruises, visiting his daughter Rachel in Mexico or his friend Mike in Germany, and participating in a number of mission trips to Haiti and South Africa, where he helped spread the word of Jesus while helping with a variety of service projects. During these trips, Duane always looked for opportunities to go SCUBA diving, fishing, wine-tasting, and sharing his famous hand-dipped chocolates.
A gentle and thoughtful man with a great sense of humor, Duane was loved by many and will be missed by everyone who knew him.

Duane's funeral service will be held in Bethel Evangelical Free Church, Fargo, on Monday August 2, 2021, at 2 PM. Visitation will be one hour prior to the funeral.

To order memorial trees or send flowers to the family in memory of Julian Duane Elofson, please visit our flower store.