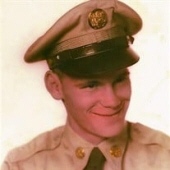 Johnny B. Thesing, 79, longtime resident of Ulen, MN, died Thursday, January 5, 2017, in Viking Manor, Ulen.
Johnny was born July 10, 1937, the son of John and Cecelia Thesing, in Burtrum, MN. The family moved to Wadena, MN, where Johnny went to school until the age of thirteen. Johnny worked on farms in the area until the age of sixteen.
In 1953, Johnny enlisted in the US Army. He was stationed in Korea, France and Germany. After his discharge from the army, he re-enlisted within 30 days, and was stationed in Ft. Eustis, VA, and Goose Bay, Labrador. After his enlistment, the Army mandated he have a high school diploma, so Johnny started a 6 week GED course and graduated at the top of his class, which enabled him to receive a diploma from Wadena High School.
When the Berlin wall crisis broke out, Johnny was placed on extension and sent back to Germany. He was discharged within three months and returned home, and lived in the Moorhead, MN, area. He worked in the American Crystal Sugar Company plant in Moorhead for 23 years.
In 1986, Johnny moved to Ulen, where he lived until his death. He was a life member of the VFW. He loved helping small kids with their bikes and helping family and friends with whatever he could.
Johnny is survived by two daughters, Jewell (Leroy) Tow, California, and Lori (Troy) Nappe, Moorhead; five sons, Rick (Crystal), Ulen, and Johnny, Jay and Jamie, all of Fargo, ND, and James of New York; a sister, Mary Lue Maidment, Georgia; and five grandchildren. He was preceded in death by his parents; a daughter, Debbie, at age 6; a son, Johnny, at age 8; two brothers; and two sisters.
Johnny will be dearly missed by his beloved dog, Bob.
Visitation for Johnny will be Monday, 4 PM until 7 PM, with a prayer service at 7 PM, in Korsmo Funeral Chapel, Moorhead. His funeral mass will be Tuesday, Jan. 10, 2017, at 11 AM, in St. Joseph Catholic Church, Moorhead. Burial will be in St. Joseph's Catholic Cemetery, Moorhead.

To order memorial trees or send flowers to the family in memory of Johnny Thesing, please visit our flower store.