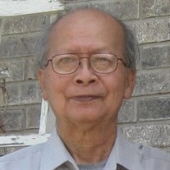 John Chong-Ho Tsen was born on 10/19/1933 to Hai-Li Tsen and Bu Hong at Tainan, Taiwan. He was the youngest of 6 brothers and was the first in his family to receive a college education, a civil engineering degree from Tainan's Cheng Kung U. He married Feng-Ying Hwang on 2/22/1960 and then had 2 sons Wei-Ching (later named David in US) then Nan-Rung (later named Tony). He designed and also helped build the family's first house in Tainan.

In 1970, he started and attained master's degree in structural engineering at the U. of Houston. In 1971, the rest of family joined him as new immigrants to USA and settled in Houston, TX, where he would work for many major petrochemical engineering firms. After 1974, the family was first owners of 2 sequential houses in south Houston suburbs. Finally, he enjoyed a backyard garden of Asian pear trees and Chinese vegetables and played on a pool table in the family room. The family also bought a small hobby farm 50 miles away, where he dug a small pond, built a bridge to span the pond's neck, and stocked the pond with catfish and bass. The family finally gained naturalized US citizenships in 1982. After 1983, in spite of several prolonged layoffs, he and Feng-Ying had practically paid for all of the sons' college and then medical school expenses: David attended Princeton U. and Tony attended Notre Dame U., and both became MDs at U of TX at San Antonio. The available jobs took the couple away to cities in the Midwest and eventually back to Houston. After his final lay-off in 1994, the couple moved to Fargo to live close to David's family.

They eagerly helped to raise David's children: Rachel Yee-Cin, Jonathan Yee-Jon, and Emily Yee-Ann. John finished numerous major remodeling projects at David's house, not to mention in his own duplex. He maintained a very productive garden. He greatly enjoyed cruise ship trips taken with David's family. He especially enjoyed being called "Papaiya" by the grandchildren.

After a major surgery in 1998, he has attended church services regularly and received well the Gospel. He would often summon David to begin each family meal together in prayer. He has modeled unwavering devotional love to his wife, practical ingenuity of his hands, and intense love for his sons and grandchildren. He now enjoys his new body in heaven.

To order memorial trees or send flowers to the family in memory of John Tsen, please visit our flower store.