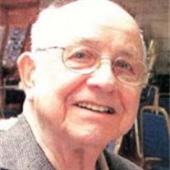 John "Johnny" Altobell was born December 20, 1917, in Dilworth, MN, to Antonio and Letizia (DiBrita) Altobelli. His mother died at an early age, and John was raised with his siblings at St. John's Orphanage, Fargo, ND, until returning at the age of 13 to his family in Dilworth. John graduated from Dilworth High School in 1936, then attended Moorhead State University, Moorhead, MN, where he took courses in physical education and industrial arts. He also participated in football and basketball.

In February of 1941, John's guard unit was activated and deployed to Germany, where he served as a Tech. Sgt. in the Army. He was in charge of a battalion communications section and supervised the work of maintaining, repairing, and installing wire and radio communications.

Upon his discharge in 1946, he moved to Chicago, IL, where he graduated from decorating school. He then returned to the area and worked as a carpet salesman in ND, SD, and MN. On August 7, 1965, he married Kathleen "Kathy" Steffes in Andover, SD. They moved to Moorhead in 1966, where they raised two daughters. John continued to work as a carpet salesman until his retirement, at which time he became the manager of the Arvid Benson carpet department.

John loved his family and grandchildren and was an active member of St. Joseph Church parish. He was an avid sports fan, enjoying football, basketball, and baseball.

To order memorial trees or send flowers to the family in memory of John Altobell, please visit our flower store.