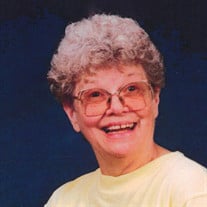 Johanna Ness, 89, Moorhead, MN, died January 17, 2021, in her home surrounded by her family and in the care of Hospice of the Red River Valley. Johanna Malena (Royland) Ness was born July 2, 1931, on her family farm in St. John, ND. Johanna attended grade school in Halliday, ND, and later graduated from high school in Rolla, ND. After graduation she married her best friend, O Nolen Ness, on October 9, 1949 in Rolla. They would then make their home in Moorhead in 1958. Johanna took great pride in the many accomplishments she achieved in her lifetime. Some of her best memories were made when she was an employee of the MD Drive In, Neubarths Jewelry, as well as Jerry's Market. However, Johanna's kind heart and willingness to help others showed most through her years of being a nurse’s aide at St. Ansgar Hospital, in home health, and later at Moorhead Manor. Johanna also enjoyed her time as a den mother for her son's Cub Scout group and as a Sunday school teacher through the boy’s younger years. The big family Christmas is one other thing Johanna took great pride in. She loved to have the family together and made traditional Norwegian dishes of lutefisk and lefse. Johanna and Nolen liked to travel and spend the summers at the cabin in Erskine, MN. Trips to Washington, DC every November and the trip of her lifetime to Norway were the highlights of her travel. She would tell stories on how she was able to visit her parents’ childhood homes and see the many amazing wonders of Norway. She treasured her many crochet quilts, pictures of family, and friends she had made on her trip. She would spend years singing the songs and telling the stories to family and friends. Surviving Johanna are her two sons, Helmer Ness and Clayton Ness; grandchildren, Corey (Laurie) Ness, Lisa (Chad) Klemetson, Mike (Nicole) Erickson, Brenda (Jesse) Radloff, Scott (Anna) Ness, Joie Thompson, and Ryen (Amy) Ness; nineteen great-grandchildren; ten great-great-grandchildren; sister, Marie (Leonard) Birkeland; and brother, Mark Royland. Johanna was preceded in death by Nolen, her husband of forty-eight years, as well as her parents, Nicholai and Johanna Sophie (Eike) Royland; and eight of her siblings. A private family service will be held in Korsmo Funeral Chapel in Moorhead. If you care to view Johanna’s funeral service, please follow this link: https://portal.midweststreams.com/services/iframe/16235

Johanna Ness, 89, Moorhead, MN, died January 17, 2021, in her home surrounded by her family and in the care of Hospice of the Red River Valley. Johanna Malena (Royland) Ness was born July 2, 1931, on her family farm in St. John, ND. Johanna... View Obituary & Service Information

The family of Johanna Ness created this Life Tributes page to make it easy to share your memories.

Send flowers to the Ness family.