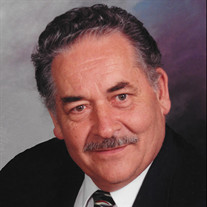 Jerome Joseph “Jerry” Schmaltz, 83, of Fargo, ND, died Sunday, September 22, 2019, in Villa Maria, Fargo, surrounded by his loving family. Jerome J. Schmaltz, the son of Michael and Frances (Axtman) Schmaltz, was born in Rugby, ND, on April 5, 1936. At the age of 6, he moved with his family to Devils Lake, ND, where he grew up and received his education. He graduated from St. Mary’s Academy in 1954. After high school he attended Dakota Business College in Fargo. On August 16, 1956, Jerry married Lola Mae Morrow in Devils Lake. They first lived in Devils Lake until 1962, when they moved to Grand Forks, ND. They later moved to Aberdeen, SD, and came to Fargo in 1968. In 1971, they made their home in Moorhead, MN, returning to Fargo in 2001. They have also wintered in Mesa, AZ, for many years. Jerry was a salesman, furniture buyer, and a partner of a number of furniture stores until his retirement in 2000. He also spent many years partnering with his brother Clem, selling fireworks in Devils Lake. Jerry is survived by his wife, Lola, Fargo; four children, Cynthia (Randy) Ruud, West Fargo, ND, Patrick (Patti) Schmaltz, Mesa, Shannon (Carl) Schwartz, Fargo, and Kimberly (James) Jerger, West Fargo; a stepsister, Ann Ragel, Simi Valley, CA; 8 grandchildren; and 10 great-grandchildren. He was preceded in death by his parents; two brothers, Clem and Timothy; and three sisters, Lucia Schommer, Dorothy Johnson, and Helen Schmaltz. Visitation for Jerry Schmaltz will be Thursday, September 26, 2019, from 5 PM until 7 PM, with a prayer service at 7, in Korsmo Funeral Chapel, Moorhead. His funeral mass will be Friday, at 11 AM in St. Joseph Catholic Church, Moorhead. He will be buried in Holy Cross Catholic Cemetery South, Fargo. In lieu of flowers, the family requests memorials be sent to American Cancer Society, American Heart Association, or American Diabetes Association. The family would like to send a special thank you to Essentia Health, Dr. Christina Harmon, Nurse Ashely, the nurses and staff at Villa Maria, and Hospice of the Red River Valley.

The family of Jerome "Jerry" Schmaltz created this Life Tributes page to make it easy to share your memories.

Send flowers to the Schmaltz family.