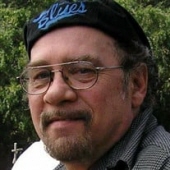 PLEASE NOTE: THE VISITATION AND PRAYER SERVICE FOR JEFF HAS BEEN MOVED TO PEACE LUTHERAN CHURCH IN FARGO, ND.

Jeffrey Thomas Mooridian was born December 24, 1945, in Fargo, ND, to George and Elizabeth (Garland) Mooridian. Jeff was raised in Dilworth, MN, where he graduated from high school in 1963. Jeff exhibited an exceptional talent for music at an early age. He began guitar at age 12, was giving lessons and played his first professional gig at age 15.

Jeff toured with Eddie Cash for several years and then became a prominent musician in the Fargo-Moorhead music scene for many years. Jeff's first love was jazz but he excelled in all styles of music. Jeff formed Landmoor Production Company in 1996.

He was an accomplished musician who provided entertainment in the Fargo-Moorhead area for over fifty years. He was inducted into the North Dakota Rock Country Music Hall of Fame in 2012. Jeff married Margaret Faleide on January 11, 2002, in Moorhead, MN, and they made their home in Fargo.

A Life Celebration service will be Friday, February 17, 2017, at 2 PM, in Peace Lutheran Church.

To order memorial trees or send flowers to the family in memory of Jeffrey Mooridian, please visit our flower store.