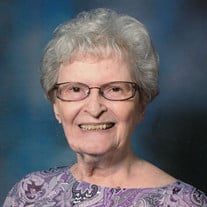 Janet Denise Gallagher, 84, Moorhead, MN, formerly of Big Cormorant Lake, MN, went to heaven Monday, January 20, 2020, at River Pointe of Moorhead. Janet was born November 22, 1935, in Minot, ND, in St. Joseph’s Hospital, to Wilbur and Beatrice (Bacon) Waterman. She was raised in Minot where she graduated from high school in 1954. Janet married Marvin Thornby and to this union, three sons were born, Craig, Keith, and Bruce. Bruce passed away January 28, 2009, which was very difficult for Janet to lose her youngest son. Janet worked at the Minot Daily News in the 1960s. She loved writing and editing, and had many adventures as a newspaper reporter, including a visit to a Minuteman missile site in the 1960s. Janet eventually left Minot and moved to the Fargo-Moorhead area where she worked for Concordia College as the class notes editor. While working at Concordia, she finished her degree in English writing, at the age of sixty-four. It was a life-long dream of hers to be a college graduate. Janet married Howard Gallagher in 1971, and they made their home on Big Cormorant Lake, Pike’s Bay area, in 1972. They both loved the lake and the friends they made there. Janet even took on the task of writing a book called “Bridging the Gap,” the story of the Lake Cormorant region. After they retired, they spent many winters at Lake Havasu, AZ, where they made many friends. Janet also authored a book called “An Ingredient Called Kate.” She won the Beverly M. Family History Memoir award for this book. She was a member of the Press Women’s Association for many years. Janet collected pigs, as the Bacon family name suggests. She has hundreds of pigs from around the globe. She also authored her own newsletter for pig collectors called “Pigtales and Hogwash.” Poor Howard lived his life with pigs in the bathroom, pigs on the walls, pigs in the yard, and pigs in the garage. She even dressed up as Miss Piggy for a pontoon float contest. Howard and Janet loved cruising around Cormorant Lake on their pontoon. Thank you, Howard, for putting up with all of Janet’s pigs. Janet is survived by her husband, Howard; sons, Craig (Judy) and Keith (Tracey) Thornby; daughter-in-law, Myra Thornby; Howard’s daughters, Lori (Steve) Rasmussen, Becky (Steve) Kennedy, and Vicki (Steve) Pohlman; and a number of grandchildren and great-grandchildren. She was preceded in death by son, Bruce; brother, Charles Waterman; and sister, Ester Lokken. Visitation for Janet will begin at 12 noon, followed by a Life Celebration service at 1 PM, Thursday, January 30, 2020, in Korsmo Funeral Chapel, Moorhead.

The family of Janet Gallagher created this Life Tributes page to make it easy to share your memories.

Send flowers to the Gallagher family.