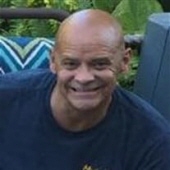 James Bryce Borchert, 57, of Fargo, ND, died Thursday, January 12, 2017, in his home surrounded by those who loved him dearly. Jim died of complications due to small cell carcinoma.

Jim was born June 4, 1959, to Burton and Bonnie (Skogebo) Borchert. He was born in the small town of Albert Lea, MN. He grew up in Ellendale, MN, and graduated from Ellendale High School. After high school, Jim attended the University of North Dakota, Grand Forks, ND, where he majored in aviation. But God had different plans for Jim. Instead of pursuing a career in aviation, Jim channeled his inner salesman and began working for a gaming business based out of Grand Forks. After many years of working in the gaming industry, Jim decided to open his own business, Borchert Distributing.

Jim was a loving husband, father, grandpa, and friend. He was known for his sense of humor and kind heart. He was always going out of his way to help his friends and family. He had a way of making everyone in a room laugh within minutes of being there. He lived to make other people happy.

Jim was a recovering alcoholic and was seven years sober when he passed. Alcoholics Anonymous was a large part of his life, and was a huge part of the man he was.

One of Jim's many hobbies in life was fishing. As springtime approached, he would work on his boat so it was ready to take out on the freshly thawed lakes. He was born a fisherman! Jim also became well known for his craftsmanship with woodworking, and took great pride in each piece he created. He also owned a yellow Volkswagen van and was fixing it up to take on a cross-country road trip he had been planning. Spending time with his children and grandson, Maddyx, was one of his favorite pastimes.

Jim was preceded in death by mother, Bonnie; and brother, Bradley.


There will be a Gathering of Friends on Thursday, January 19, 2017, from 5 - 7 PM, with a Celebration Service at 7 PM, in Korsmo Funeral Chapel, Moorhead.

To order memorial trees or send flowers to the family in memory of James "Jim" Borchert, please visit our flower store.