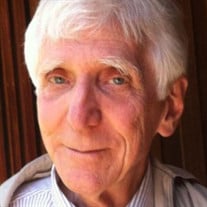 To view Jim's service, please follow this link: https://portal.midweststreams.com/services/iframe/19452 Jim Horsley entered into the presence of the Lord early in the morning on April 28, 2021. James Allen Horsley was born March 30, 1938 to F. Allen and Kathleen (Fanoe) Horsley in Martinez, CA. The family moved to Los Angeles and then Houston as Shell Chemical Co. transferred his father before returning him to the Bay Area, where Jim started kindergarten in Lafayette. Several years later they moved to a hillside home in Danville with a great view of Mt. Diablo, and Jim graduated from San Ramon Valley High School in 1956. His greatest boyhood memories were formed helping out at his grandfather’s “lettuce ranch” near Salinas, hiking the High Sierras with his father and brothers, and loping around Las Trampas Park near their home, preparing him well to attain school records in both low and high hurdles as a junior. The summer before his senior year, however, he was stricken with juvenile arthritis. No longer a jock, he claimed he became somewhat of a nerd. Jim’s dream of a track scholarship to his parents’ alma mater, the University of California, Berkeley, was gone, but he enrolled anyway and pledged Chi Phi fraternity where his lampooning of the college Greek culture was not appreciated. He received his Bachelor of Arts degree in 1962 after changing his major several times and promptly contacted the leading San Francisco and Oakland newspapers in hopes of becoming a reporter, but an adviser at Cal had encouraged him to major in English and the papers weren’t interested in someone without a journalism degree. So he settled on a small newspaper in El Centro near the Mexican border, followed by a paper in Yreka near the Oregon border. One of his beats there was Happy Camp several miles to the west, but he was not allowed to report from there in person because of its wild west reputation. Yreka was followed by the Seaside Sentinel and the Monterey Herald on the coast, where he met Vivian Martin, whom he married in 1965, after which they embarked on several cross-country moves in search of fame, fortune and marital bliss. In between these searches, Jim spent several years in public relations in San Francisco with the Hill+Knowlton and Daniel J. Edelman firms, writing speeches for the California Bar Assn. and the California Medical Assn. Eventually he taught English composition at College of the Desert in Palm Desert, CA. Jim joked that he moved from California to Moorhead, MN “for the weather.” In actuality, he was continuing Masters Degree studies at North Dakota State University, a venture doomed in part by slipping on ice, twice, breaking a shoulder and his neck. His arthritis had morphed into ankylosing spondylitis and he had lost six inches of height as his back and neck had spontaneously fused and he had both hips replaced. By 1998 life was spiraling out of control. Vivian had divorced him and he was facing eviction from a long-term care facility when he recalled the words of his Grandma Daisy when he was a small boy. “You need Jesus, Lambie,” she said. Jim had not grown up in a church-going family, though he had attended as an adult and believed in God on an intellectual level. Now he realized he did need Jesus, and he committed his life to the Lord, trusting God to meet his needs. And God did bring people into his life who helped him, thereby strengthening his faith. He attended several evangelical churches before he joined Calvary Baptist Church, Fargo (now Calvary Church at Village Green). He also attended Bible Study Fellowship for several years, and thrived on the camaraderie and Bible-based discussions. After 15 years of trying to rebuild his first marriage, Jim met Karen Lindholm at Calvary and invited her to meet for tea one night, whereupon they spent the evening explaining to each other how neither was ever going to remarry. Despite their diametrically different backgrounds, God made it clear they were “made for each other” and they were married November 20, 2010. Jim was curious and passionate about life, research and nature. Twenty years ago he was able to purchase a swamp with a beaver pond. His love of life drew him to work with FM Life Coalition for several years, and to champion the cause of America’s national mammal, Yellowstone National Park’s wild bison, by submitting petitions to the Department of the Interior. After publishing the petitions, he went on to champion the cause of Native Americans and he leaves behind an almost-completed manuscript of Washita—Genocide on the Great Plains. Despite a lifetime of physical challenges, Jim remained upbeat and seemingly undeterred until the appearance of pancreas cancer two years ago unleashed a cascade of chemotherapy, miserable side effects, radiation and ensuing side issues requiring even more treatments and meds. Yet he and Karen had many adventures at the beaver pond, and sometimes it seemed like his incessant research might help him beat the disease. But last Sunday he became extremely ill and was diagnosed with septic shock which took his life two-and-a-half days later. Jim is survived by his wife, Karen; daughter, Allison Faszholz; son, Shem (Joy) Horsley; and three granddaughters, Annamarie Faszholz, Grace and Faith Horsley. Also son-in-law, Alan Faszholz; step-son, Jon Martin; and Karen’s family who also loved him dearly. He was preceded in death by his parents; brothers, Bill and Chris; and step-daughter, Valerie Martin. Jim’s funeral service will take place at 10:30 a.m. Saturday, May 1, in Calvary Church at Village Green, 2801 Village Green Blvd., Moorhead, MN, with visitation at Korsmo Funeral Chapel in Moorhead from 5 p.m. to 7 p.m. Friday, April 30. Interment will be at 3:30 p.m., Saturday in Salem Covenant Church Cemetery, 7811 135th St. NW, Pennock, MN. The Saturday service will be livestreamed on Jim’s obituary page at www.korsmofuneralservice.com and also available for future viewing.

To view Jim's service, please follow this link: https://portal.midweststreams.com/services/iframe/19452 Jim Horsley entered into the presence of the Lord early in the morning on April 28, 2021. James Allen Horsley was born March 30, 1938 to... View Obituary & Service Information

The family of James A. Horsley created this Life Tributes page to make it easy to share your memories.

Send flowers to the Horsley family.