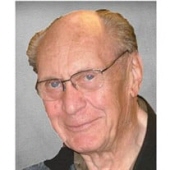 Jack Curtis Frenette was born June 16, 1927, to Percy and Sarah (Stirwalt) Frenette in Fargo, ND. He grew up in Fargo and graduated from Fargo Central High School in 1945. He began working with his father during high school at Dakota Electric Construction. He served for a brief time in the US Navy during World War II. He attended North Dakota Agricultural College (NDSU) for two years in electrical engineering. He continued to work for Dakota Electric Construction. After his father's death, he was employed as part of Sound Inc. He then left to start Frenette Electric in July 1975. He retired and sold the business in 1990, at the age of 62. He remained active doing electrical work for many years.

On August 18, 1950, he was married to Virgene "Gene" Olson in Fargo, whom he had met at NDAC. They made their home in Moorhead and were the parents of two children, Michele and Michael.

Jack was a faithful member and longtime servant at Bethel Evangelical Free Church, where he served as a trustee and often did electrical repairs. He was also did excellent woodworking and made furniture. He liked to hunt and fish and was a member of the Fargo Rod and Gun Club.

Visitation will be Friday, February 12, 2016, from 6 PM to 8 PM, with a sharing service at 7 PM, in Korsmo Funeral Chapel, Moorhead. The Funeral Service will be Saturday, February 13, 2016, at 2 PM, in Bethel Evangelical Free Church, Fargo. Burial will take place in Riverside Cemetery in Fargo.

To order memorial trees or send flowers to the family in memory of Jack Frenette, please visit our flower store.