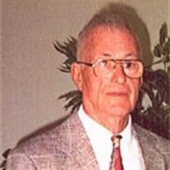 
James Paul Gunkelman was born on March 2, 1922, to Ada (Lockhart) and Ralph Frank Gunkelman, in Fargo. He grew up in Fargo and graduated from Fargo Central High School in 1940. He attended the University of Minnesota for two years. When the war started, he came home to help run the family business. He managed the R.F. Gunkelman and Sons elevators in Grandin, ND.

He married Inez Hanson from Litchville, ND, on June 30, 1946. They made their home in Grandin until 1972. They moved to Fargo, where he established Agra By Products and later Dakota Quality Bird Seed.

Paul was very active in the Grandin community where he served as a volunteer fireman, school board member, and clerk of the city. He was a member of the Fraternal Order of Masons in Hillsboro and El Zagal Temple of the Shrine in Fargo. He also served on many committees in the agricultural field. He was a member of the First Baptist Church in Fargo and while living in Grandin, the First Presbyterian Church.


What was most important to Paul was his family. He enjoyed summers at Floyd Lake, MN, gardening, playing bridge with friends, and spending time with his grandchildren.

He was preceded in death by his infant son, Steven; his parents, Ada and R.F. Gunkelman; siblings, Lloyd, Robert, John, Alice, and Betty.

The family requests that memorials be given to the First Baptist Church, Fargo, and Hospice.

The funeral service will be Wednesday at 1:30 PM at First Baptist Church, Fargo.

To order memorial trees or send flowers to the family in memory of J. Paul Gunkelman, please visit our flower store.