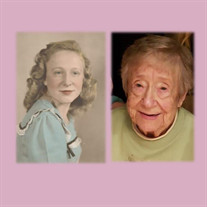 Isabelle Wenner, age 92, of Moorhead, MN, died Saturday, November 13, 2021, in Eventide on Eighth, Moorhead. Isabelle Rose Wyborny, the daughter of Sylvester and Rose (Januszewski) Wyborny, was born near Hope, ND, on October 25, 1929. She grew up and graduated from high school in Perham, MN. She attended St. John’s Hospital School of Nursing, in Fargo, ND, and graduated in 1951. She worked as a registered nurse at hospitals in Fargo and Perham. On June 11, 1955, Isabelle married her high school sweetheart, James Wenner, in Perham. As many couples were forced to do at the time, they had a long distance courtship while Jim served in the Navy during the Korean War. They made their home in Moorhead, where Isabelle worked as an RN. She retired in 1999, from MeritCare Clinic, on 13th Ave. South, Fargo. Jim and Isabelle recently moved to Eventide Linden Tree in Moorhead. Isabelle was a feisty fighter from birth until the end of her battle with cancer. She loved to tell the story that she was born 2 months premature at home. Her “incubator” was an overstuffed chair that was placed in front of the wood stove and she was fed with an eye dropper until she grew strong enough for a bottle. “Isy” loved to bake for her family and friends and she was enlisted to make mints for many weddings and celebrations. She enjoyed traveling, family camping trips, and showing off her needlework skills at Bonazaville. Always the helper, Isabelle volunteered at her church, the Fargo VA hospital, and was readily available to lend a helping hand at weddings and family celebrations. She was a member of the VFW as well as the National Association of Letter Carriers Auxiliary, where she held the offices of president of the local chapter and secretary of the national organization. Isabelle is survived by her husband, James Wenner, Moorhead; a daughter, Mary (Don) Kramvik, Moorhead; a son, Dan (Karen) Wenner, Detroit Lakes, MN; a sister, Caroline “Kelly” (David) Anderson; four grandchildren, James (Brianna) Kramvik, Adam (Mary) Kramvik, Jennifer (Jesse Nessel) Wenner, and Kelsey (Brian) Taylor; and five great-grandchildren. She was preceded in death by her parents; and a brother, Sylvester Jr. “Bud” Wyborny. The family would like to thank the staff of Roger Maris, Eventide, and Hospice of the Red River Valley for the excellent care they provided. Memorials preferred to Roger Maris Cancer Center, Fargo. A private family service for Isabelle will be held. Her service will be livestreamed on the St. Francis de Sales Catholic Church website, beginning at 10 AM on Saturday, November 20, 2021. She will be interred at a later date in the Fargo (ND) National Cemetery.

The family of Isabelle Wenner created this Life Tributes page to make it easy to share your memories.

Send flowers to the Wenner family.