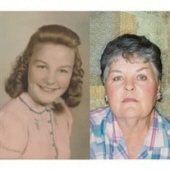 Irene Bellmore, 85, of Fargo, ND, went to be with the Lord and her twin sons, Bruce and Brian, on Saturday, April 11, 2015, in Sanford Palliative Care, Fargo.

Irene Ehlert was born October 23, 1929, to Ben and Margaret (Miller) Ehlert, in Wahpeton, ND. She married Howard Bellmore on January 27, 1948. He was an engineer for Burlington Northern Railroad.

She was preceded in death by her twin sons, Bruce and Brian, and her parents.
For those who would prefer to make a donation, in lieu of flowers, we would ask that it would be to Roger Maris Cancer Center.

To order memorial trees or send flowers to the family in memory of Irene Bellmore, please visit our flower store.