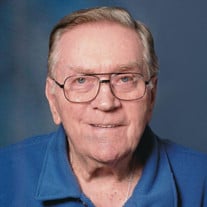 To view the recording Howard's service please click on the link below: https://portal.midweststreams.com/services/iframe/19604 Howard Patrick Gallagher, 84, Moorhead, formerly of Big Cormorant Lake, MN, died Wednesday, March 17, 2021, at Eventide on 8th, Moorhead. Howard was born in Aberdeen, SD, on April 29, 1936, to Clinton and LaRayne (Sheleny) Gallagher. When he was 6 his family moved to Moorhead where he graduated from high school in 1954. He enlisted in the US Army, was stationed at Fort Lee, VA and served for 3 years, then returned to Moorhead. Howard married Frona Hanson in 1956 and had three daughters. He worked most of life as a salesman for various companies, the last one being Unitog, traveling in North Dakota, South Dakota and Minnesota. If there was a piano bar nearby, he would be there singing for the crowd. One of his favorites was Danny Boy. Howard married Janet Thornby in 1971 and they made their home for many years on Big Cormorant Lake, Pike’s Bay Area. They loved living on the lake and made many friends there. After they retired, Howard and Janet spent many winters in Lake Havasu, AZ, where Howard spent a majority of his time on the golf course. They eventually moved to Moorhead. Howard is survived by his daughters, Lori (Steve) Rasmussen, Becky (Steve) Kennedy, and Vicki (Steve) Pohlman; Janet’s sons, Craig (Judy) and Keith (Tracey) Thornby; and a number of grandchildren and great-grandchildren. He was preceded in death by his wife, Janet; his parents; two sisters, Collene Barnick and Claudia Keeves; a brother, Monty; and Janet’s son, Bruce. A Celebration of Howard’s Life will be held Thursday, May 6, 2021 at 1PM in Korsmo Funeral Chapel. A livestream link will be available here on Howard's obituary page.

The family of Howard P. Gallagher created this Life Tributes page to make it easy to share your memories.

To view the recording Howard&#39;s service please click on the link...

Send flowers to the Gallagher family.