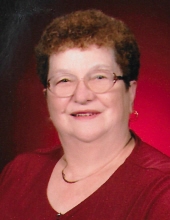 Hilda Fein was born October 29, 1937, in Heidelberg, Germany, to Ludwig and Elizabeth (Schmitt) Fein. Hilda was raised in Heidelberg where she received her education.

She married Leif D. Tronstad on August 11, 1959, in Heidelberg. They lived in numerous cities throughout the United States as Leif was serving in the military and then with the railroad. Their last move brought them to Moorhead, MN, in 1982.

Leif died on July 10, 1985, and Hilda has made her home in Moorhead since that time. She worked many years for Kmart in Moorhead.

Hilda was very active in many roles at Ascension Evangelical Lutheran Church in Moorhead. She enjoyed puzzle books, and reading Harlequin romance novels. She learned the English language by listening to Elvis Presley recordings and even visited Graceland.

Family was very important to Hilda. She made numerous trips to Germany over the years to reconnect with her relatives.

Visitation for Hilda will begin at 1 PM, followed by a funeral at 2 PM, Saturday, April 2, 2022, in Ascension Evangelical Lutheran Church, Moorhead. Burial will take place in Evergreen Memorial Cemetery, Moorhead.

To order memorial trees or send flowers to the family in memory of Hilda Tronstad, please visit our flower store.