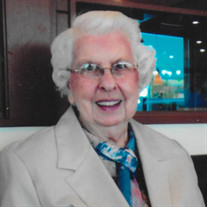 To view the funeral service for Helen on Thursday, please follow this link: https://youtu.be/lema2VG1044 Helen Delilah Arnseth was born May 30, 1922, to Julius and Inga (Lee) Arnseth, in Fargo, ND. She was baptized and confirmed in Pontoppidan Lutheran Church in Fargo. Helen attended Horace Mann and Roosevelt schools and transferred, in her sophomore year, to Oak Grove Lutheran High School where she graduated in 1940. From there, she attended and graduated from Augsburg College in Minneapolis, MN, in 1944. After two years of high school teaching, she attended Lutheran Bible Institute for two years, and graduated in 1948. Helen received a mission call to teach in Madagascar and went to Paris for two years of Language study in preparation for directing a school in Madagascar. She worked in Madagascar for seven years and then had a furlough in the United States. Helen returned to Madagascar and continued her teaching jobs and furloughs until August of 1969. She joined Daystar Ministries in September of 1969 and continued with them until January of 1985. She took YWAM training for three months in Hawaii, followed by two months for short term ministry in Philippines, Hong Kong, China and Korea. She returned in June of 1985. Helen worked three years at the Wisconsin base of YWAM until 1988. She then worked in Chippewa Falls, WI, as Foster Grandparent and French teacher in a Christian school until 2005, when she moved to Moorhead, MN, to be with her relatives. In September of 2007, Helen joined Olav Torvik in marriage in San Antonio, TX, where they lived until his passing in November of 2008. She continued to live in Texas until June of 2010, when she returned to Moorhead. Helen died Thursday, April 29, 2021, in Eventide on Eighth, Moorhead, at ninety-eight years of age. Helen is survived by a sister-in-law, Helen; several nieces and nephews; and Olav’s children, grandchildren and their families. Memorials may be directed to Jews for Jesus; 60 Haight Street, San Francisco, CA; 94102-5521; phone 415-864-2600. Mercy Ships (YWAM); PO Box 1930; Garden Valley, TX; 75771; phone 877-604-0015; or Triumph Lutheran Brethren Church World Missions. Visitation for Helen will begin at 10 AM, followed by a funeral at 11 AM, Thursday, May 13, 2021, in Triumph (East) Lutheran Brethren Church, Moorhead. Burial will follow in Moorhead Memorial Gardens.

To view the funeral service for Helen on Thursday, please follow this link: https://youtu.be/lema2VG1044 Helen Delilah Arnseth was born May 30, 1922, to Julius and Inga (Lee) Arnseth, in Fargo, ND. She was baptized and confirmed in Pontoppidan... View Obituary & Service Information

The family of Helen Arnseth Torvik created this Life Tributes page to make it easy to share your memories.

To view the funeral service for Helen on Thursday, please follow...