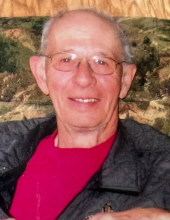 Harry Gordon Hawk, the son of Harry and Edna (Lindberg) Hawk was born December 1, 1934 in Lytton, Iowa. While serving in the Army as part of the ASA during the Korean War, he met his wife Helen on a moonlight cruise in Boston, Massachusetts. They were married on September 8, 1956, in Haydenville and moved to Minnesota in 1963. Harry spent the vast majority of his career life as a traveling salesman. Harry will be remembered by many who he befriended with his humor and playful personality.

He was preceded in death by his parents Harry and Edna (Lindberg) Hawk; wife, Helen; and one stillborn twin child.

Harry’s family extends a heartfelt thank you to all the nurses and care givers at Serenity Assisted Living and Ethos Hospice Care for providing exceptional and compassionate care during his final time on earth.

Some of Harry’s best friends were his beloved dogs. Memorials may be made in Harry’s name to Homeward Animal Shelter 1201 28th Avenue N., Fargo, ND, 58102.

Harry’s Funeral Mass will be 11:00 AM. Tuesday, June 21, 2022, in St. Elizabeth Catholic Church, Dilworth. A Visitation will be one hour prior to the Mass and a family Rosary will be recited at 9:30 AM. Burial will follow in St. Joseph’s Catholic Cemetery, Moorhead, MN.

To order memorial trees or send flowers to the family in memory of Harry G. Hawk, please visit our flower store.