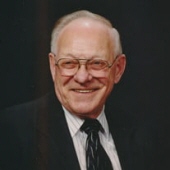 Harold Jerome Smith was born February 12, 1926, to Henry and Selma (Stundahl) Smith in Galesburg, ND. He was baptized at Elm River Lutheran Church in Galesburg and attended country school. Harold and his family also lived in Page, ND, and Chaffee, ND, before settling in Halstad, MN, where they purchased the grocery and locker plant. He then entered the U.S. Army, serving in the South Pacific from 1944 to 1946.

On June 22, 1949, Harold was united in marriage to Marcella Jane Gilbertson in Ada, MN. To this union they had four children. They established their home in Argyle, MN, in 1956, where they owned and operated Smith's Locker Plant. In 1965, they moved to Moorhead where Harold worked for Hornbacher's grocery store for more than 40 years, serving as meat manager for 20 years. In 2014, Harold and Marcella moved to River Pointe in Moorhead. Marcella passed away September 12, 2014. Harold continued to live at River Pointe until moving to Eventide on Eighth in April of 2017.

He was a member of The Lutheran Church of Christ The King, and the Halstad and Argyle American Legion. Harold enjoyed spending time working in his yard and time at the lake with family.

He was preceded in death by his wife, Marcella; daughter, Susan Smith; daughter-in-law, Patti Smith; four brothers; and three sisters.

Memorials may be directed to The Lutheran Church of Christ The King or Hospice of the Red River Valley.

A Visitation for Harold will be Wednesday from 5 PM to 7 PM in Korsmo Funeral Chapel, Moorhead.

Interment will be in Riverside Cemetery, Moorhead.

To order memorial trees or send flowers to the family in memory of Harold Smith, please visit our flower store.