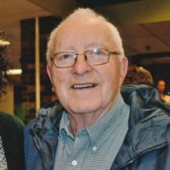 Harold was born June 5, 1921, to Clyde and Julia Graff in Menomonie, Wisconsin. He graduated from Prairie Farm, Wisconsin, High School in 1939. Harold served in the U.S. Army Signal Corp from 1942-1945. He was stationed in the Panama Canal Zone.

Harold married Ethel Qualey on January 15, 1949. They resided in Fergus Falls, Minnesota for the next twenty-three years and had eight children together. He worked in floor covering and started the store, Home Decorators, with his brother, Clyde. After the store closed in 1972, Harold and Ethel went on to reside in Idaho, Colorado, Wisconsin and North Dakota. They served as custodians at First Assembly of God Church in Fargo for eight years, and retired in 1993.

Harold was very active in his churches and a lifelong volunteer. He enjoyed hunting, fishing, camping, traveling, church-league softball and gardening. In his later years, he added jigsaw puzzles, reading and family games to the list.

Harold was preceded in death by his parents; sons, Gregory Graff and Jeffrey Graff; daughter, Malinn Graff; two brothers; and one sister.

A Celebration Service will be Friday, July 7, 2017, at 2 PM, at First Assembly of God Church, Fargo.

Burial will be Saturday, July 8, 2017 at 1 PM, at Knollwood Memorial Gardens in Fergus Falls, MN.

To order memorial trees or send flowers to the family in memory of Harold E. Graff, please visit our flower store.