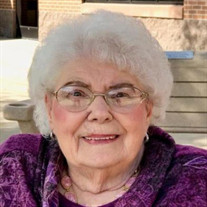 To view Marilyn's service: follow this link: https://portal.midweststreams.com/services/iframe/15249 Helen Marilyn Anderson of Moorhead, MN, passed peacefully away on December 9, 2020, from pneumonia. Marilyn was born on the farm by Gardner, ND, on April 3, 1928, to Herman and Martha (Ohnstad) Rensvold. Herman wanted his first born to have his initials so she was name Helen Marilyn Rensvold but she always went by Marilyn. Marilyn attended the country school house with her younger sister, Pearl. The girls would sometimes take their pony and cart to school with Pearl driving and Marilyn hanging on for dear life! She started Oak Grove High School in Fargo, ND, staying with her grandparents, Mons and Maria Ohnstad, on Terrace Avenue near Oak Grove. Her father missed his girls so much that he sold the farm by Gardner and purchased a farm east of Moorhead which later became the Morningside development. Marilyn went on to graduate from Moorhead High School followed by attending the St. Luke's School of Nursing in Fargo. Marilyn worked for many years at the Fargo Clinic as well as a nursing home. Marilyn loved music and had a beautiful soprano voice. She enjoyed singing in the church choir as well as the Sweet Adelines. The highlight for the Sweet Adelines was to attend the international competition in London, England. She encouraged music in her children's lives. In later years she enjoyed going to concerts ranging from the Fargo/Moorhead Symphony Orchestra concerts to such stars as Barry Manilow. Marilyn enjoyed baking holiday treats and her Special K bars. Sports played a large part of enjoyment from following the Minnesota Twins, Minnesota Vikings, and later even the Denver Broncos! One of the memories is listening to the Twins games on the radio at the cabin on Lake Ida. Nothing brought greater joy to Marilyn than attending a sports event or music performance of her children and grandchildren. She loved to be there to give her support to the kids! In her later years she also enjoyed her various living arrangements at Eventide. She would always be participating in the many activities from the Tuesday night Bingo games to chapel services. She loved having coffee with her friends and neighbors at the grill. We were blessed to have her with us for these 92 years. Marilyn is survived by her children, Sharon Bishop, Carolyn Anderson (Paul Sortland), Richard Anderson (Deb), Roger Anderson (Lori Irwin), and Marie Delgado; sixteen grandchildren; eighteen great-grandchildren; and sister, Pearl Backstrom. Marilyn was preceded in death by her parents; son-in-law, Rodney Delgado, great-grandson, Ellis Anderson; and brother-in-law, Daniel Backstrom. A public walk-through visitation will be held Wednesday, December 16, 2020, in Korsmo Funeral Chapel from 4pm-6pm. Masks are required and social distancing will be observed. A private family funeral service will be held at 1PM on Thursday, December 17, 2020, in Trinity Lutheran Church, Moorhead. Livestream links will be available here on Marilyn's obituary page. Interment will be in Riverside Cemetery, Moorhead.

To view Marilyn's service: follow this link: https://portal.midweststreams.com/services/iframe/15249 Helen Marilyn Anderson of Moorhead, MN, passed peacefully away on December 9, 2020, from pneumonia. Marilyn was born on the farm by Gardner,... View Obituary & Service Information

The family of H. Marilyn Anderson created this Life Tributes page to make it easy to share your memories.