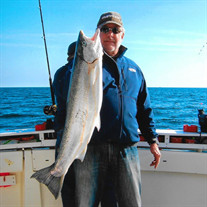 Gregory Allen Hahn was born March 25, 1951, in Fargo, ND. He graduated from Moorhead High School in 1969. On September 25, 1971, he married Debra Jury and they had three children, Gregory “Charlie” (Kari), Eric (Monica), and Elena Hahn. Greg began his career as a jeweler in 1970 at Royal Jewelers in Fargo, where he was well known for his expertise and beautiful custom creations. Greg was also an avid fisherman and hunter. He was a tournament fisherman and placed highly in many tournaments. He enjoyed many fishing and hunting trips to Canada, Florida, Alaska, and the Great Lakes. Greg enjoyed spending summers at the family lake place in Minnesota. Greg suffered a heart attack and had heart surgery in 2003. He began running and weightlifting and became a poster-child for cardiac rehabilitation. He also ran in the 2004 Fargo Marathon. Greg married Daniele Simonson in 2018. Greg continued his career of fifty years as a jeweler up until his unexpected death on October 1, 2020, at Essentia Health in Fargo, at sixty-nine years of age. In addition to his wife and three children, Greg is survived by his two grandchildren, Aden and Leo; mother, Virginia Hahn; sister, Marie (Jeff) Welna; brother, Steven (Cathy) Hahn; nieces, Lynn (Chris) Olson, and Alyssa Hahn; nephews, Stephen (Sara) Welna, and Joshua (Megan) Hahn; and seven great nieces and nephews. Greg was preceded in death by his father, Curtis Hahn. There will be a Gathering of Friends to share memories and tell fish tales on Wednesday, October 7, 2020, from 5 – 7 PM, in Korsmo Funeral Chapel, Moorhead. Following CDC guidelines, masks will be required. A private family service will be held. The recorded service for Greg will be available to view after 5 PM on Thursday, October 8, 2020, on Greg’s obituary page on the Korsmo website.

The family of Gregory A. Hahn created this Life Tributes page to make it easy to share your memories.

Send flowers to the Hahn family.