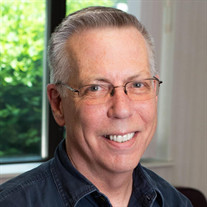 To view the recording of Greg's service click on the following link: https://portal.midweststreams.com/services/iframe/18072 Gregory Allen Hanson, 62, of West Fargo, ND, died Monday, March 8, 2021. Greg was born on August 13, 1958, to David and Beverly (Trones) Hanson in St. Cloud, MN. In 1966 he moved with his family to Moorhead, MN, where he grew up and attended school. He served in the US Army for a brief period and then attended Minnesota State University Moorhead. In 1979 he was united in marriage to Carla Schmitt in 1979 and they welcomed a son, Jason, the next year. Greg married Denise Martin in 1997 and together they raised sons Jason, Daniel, Alan, and Steven. In the 1990s, Greg co-founded Guitar Associates, a music store in downtown Fargo, ND. People flocked to the store with plugged-in amplifiers for “trying out” the merchandise, and he proudly photographed each customer. Music was his lifelong love, and he played in a number of local bands, including The Forefathers. Greg worked at Elim Care Center and most recently, CHI Riverview Place as Facility Director. His job was more than an occupation and serving the needs of the elderly became his calling. In the last year, he cared lovingly for his father, Dave Hanson, who became a resident of Riverview. Greg visited daily and kept his spirits up during the Covid-19 pandemic. In his journey here, Greg met many people and had many dear friends. He enjoyed Vikings football, working on cars, being at the lakes, and connecting with those he loved. His greatest honor was being a dad to his sons and caring for his parents. Greg continued to practice his Christian faith throughout his life. He was baptized April 3, 2016, at Prairie Heights Church, where he was an active member. He was the first to comfort the sick, reach out to the lonely, and remember the forgotten. He is survived by his parents, David Hanson and Beverly Hanson, both of Fargo; brother, Jeff (Helen) Hanson, Fargo; sister, Julie (Scott) Sandland, Moorhead; sons, Jason Hanson, Janesville, MN; Daniel (Fauntel DeShayes) Bonner, Moorhead, Alan (Ginny) Jesser, Fargo, and Steven Hanson, Fargo; as well as his grandchildren, Ryan, Coletrane, and Willow. He also leaves behind nieces and nephews, David Porter; Sarah, Rebecca, and Alex Sandland; grand-nephew, Donte; grand-nieces, Violet, Willow, and Melanie Rhodes; and his special friend, Nikki Barnhardt. He was preceded in death by his grandparents, Sig and Opal Trones; aunts, Toby Bratton and Ginger Schiro; uncles, Leonard Bratton and Fritz Schiro; and brother-in-law, Kelly Martin. A Gathering of Friends for Greg will be Thursday, March 18, 2021 from 5:00 PM until 7:00 PM in Korsmo Funeral Chapel, Moorhead. His Memorial Service will be held on Friday, March 19, 2021 at 10:00 AM, in Prairie Heights Community Church, West Fargo. In accordance with CDC and local guidelines, social distancing and masks will be required for attendance. Greg’s service will be live-streamed beginning at 10:00 AM, Friday, March 19, 2021 and the link can be found on his obituary page by visiting www.korsmofuneralservice.com. (Korsmo Funeral and Cremation Service, Moorhead, MN)

The family of Gregory "Greg" Hanson created this Life Tributes page to make it easy to share your memories.

To view the recording of Greg&#39;s service click on the following...

Send flowers to the Hanson family.